The Gang that Sang in this case is US OSHA/Health Canada; and it’s hazardous communications, not “Heart of my Heart” (despite my fondness of the former!), that they’ve been “singing” about.

In any case, despite the efforts there are still some differences between the two countries. Health Canada, following the coming into force of the Hazardous Products Act/Regulations (“HPR- WHMIS 2015”) in February, has thoughtfully produced a summary table of variances between Canada’s WHMIS 2015 and US OSHA’s Hazard Communication Standard (“HazCom” or HCS2012”).

The obvious English-French bilingual requirement is first on the list. One aspect of this that is not highlighted is the requirement to provide BOTH languages on the SDS (either as a bilingual document- or with the 2 versions attached as a single document) when selling to a Canadian customer.

As indicated in the Canada Gazette II “regulatory impact analysis statement” (RIAS), various differences are necessary to either reflect constitutional/regulatory regimes or to ensure that worker protection features considered essential are maintained.

An example of the former is the requirement to differentiate and define “hazards not otherwise classified” (HNOC) between physical and health related hazards. Also the unilateral declaration of “proprietary” information, while not specifically mentioned in the summary guide, results from regulatory constraints.

Biohazardous Infectious Materials are retained as a hazard class in WHMIS 2015 despite the absence of the equivalent class in GHS or HCS2012.
As indicated in the RIAS, the majority of differences are not considered serious detriments to trade as either the consequences of HCS2012 requirements that include things not in WHMIS 2015 are considered “not misleading” and are thus allowed- or are of relative minor importance in the context of trade volume or inconvenience.

The summary table guide may be read here »

It is worth noting that “harmonisation” (or “harmonization” if you prefer!) means that things are compatible, not necessarily identical. Wikipedia refers to the process of reducing redundancies and conflict in standards as being derived from reducing discord in music:

An illustration of the musical concept of being compatible but not unified is found in “Yankee Doodle” on the Wikipedia page on the topic:

Your source for un certified packaging solutions for shipping hazardous materials and dangerous goods of all kinds. 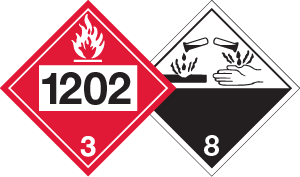